I have an idea for a game in my head. I've had it for a while, but I don't know anything about video game design. Unreal Engine 5 came out in April 2022. The demo looked amazing. The thought of my game continues to pop in and out of my brain over time. With my current free time, I decided to learn a little bit about how Unreal Engine works.

I turned to Unreal Engine 5 - Realistic Environment Design for Beginners, by Gavin Eisenbeisz on Udemy. My goal was to get a very basic understanding of how the tool worked and decide if I'd continue forward. I knew going into this that a 5 hour course wasn't going to be enough to learn everything of Unreal Engine, but hopefully it'd be enough to determine if I should learn more.

I am conflicted in how to properly evaluate this course. I have several complaints about the course (below), but it did meet my goal of getting me a basic understanding of how an aspect of the tool worked and I do want to continue learning how to use Unreal Engine.

But first, my concerns...

This version difference isn't a deal breaker, but it does mean that quick clicks the instructor does on video don't align to the UI currently in use on version 5.0.3. They are in different locations or are renamed or simply merged into another option that isn't clear.

The instructor has not been responsive to students in the course. The landscape material bug has multiple discussion threads on the course Q&A section, but no response from the instructor. Students are clearly frustrated at the lack of response, and some have given up the course because they assume this bug prevents them from moving forward. Buried in the comments is a note from another student that this does not impact other areas AND the material will be useable when painting the landscape. Again, frustration.

There was plenty of good in the course though:

With a title of "Realistic Environment Design", it's not surprising that the course focused on building a landscape. Covering sculpting, texturing, decorating and a few small environment things like collisions and basic lighting, I was able to create an island. It's not going to win any awards for level design, but for a first time, I'm proud of it.

Plus, the kids now was to add "all the things" to my island.

Forgive the lack of true cinematics, and only 6 seconds of video...this wasn't covered in the course and I probably found an old way to do this manually, but here is my island.

I would not recommend Unreal Engine 5 - Realistic Environment Design for Beginners as your first introduction to Unreal Engine 5. The course is a year out of date and running on an early access version of the engine. However, if you know the tooling a little bit (or are willing to pause and Google a quick how to), the overview of the landscaping tools were useful for an introduction.

This course has increased my desire to learn a bit more about the engine. I don't think I'm close to starting my game, but I am looking forward to learning more about what this tool can do - and how I'd be able to take advantage of it. 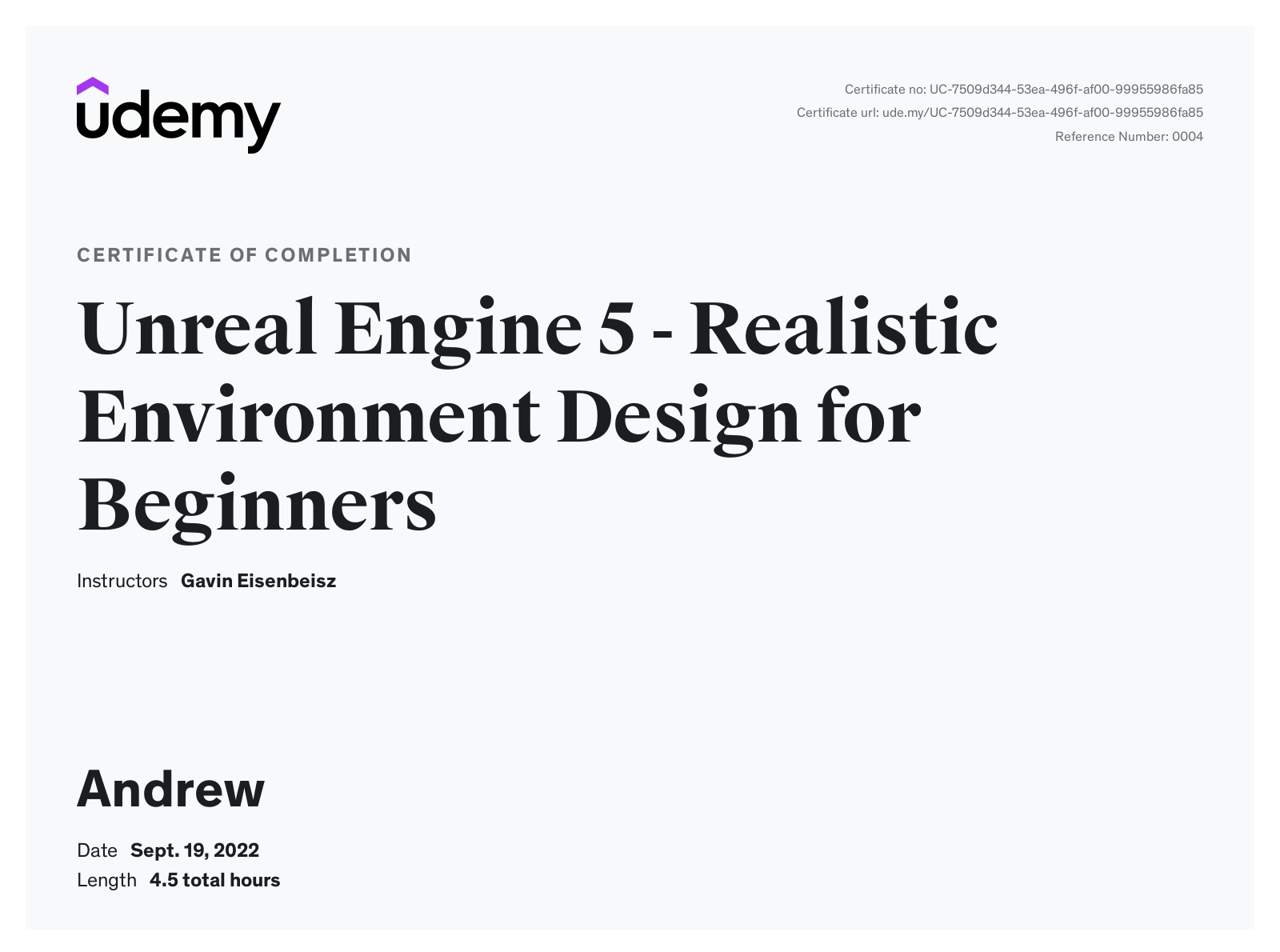