Personally and professionally, I've started bumping into Golang more and more. I've been told that it's a good language to learn and know, but until recently I didn't have a lot of free time to dedicate to learning a new language. With my down time now, I figure it'd be a great chance to pick up a new skill.

So, I turned to Go: The Complete Developer's Guide (Golang) by Stephen Grider on Udemy.

This is a 9 hour course (plus an hour or two for three self paced assignments). It goes from nothing (what's Go?) through installation to writing way more than a simple Hello, World! Through out the lessons, the instructor is explaining what's happening and why, not just throwing code into the IDE and having you run it.

The course goes through two main projects, introducing new Go concepts along the way. The first is building a small program that deals out a hand in a card game. You learn about variables, functions, receiver functions, structs, slices, unit tests, pointers and more. Nothing feels overwhelming and it is a nice logical progression.

The other project is a web site status checker, which introduces goroutines and channels. These are very important concepts in the language and the example, while basic, is not contrived. It is very good at introducing there two features, showing common problems and how to properly handle them.

I do have a couple very minor complaints. First, the course is using a slightly older version of Go. In the version the instructor is utilizing the ioutil library is still in use. In the version I have installed, that has been deprecated. This led to a few IDE warnings, and a quick search to determine how to fix it. Once that was resolved though, it was simple enough to make the few changes needed locally.

My other small complaint is the relatively short lessons. I love bite sized lessons, but when a lesson is between 4 and 10 minutes and the first minute and last minute are spent summarizing the previous lesson and giving you and idea of what the next lesson will be, there is a lot of time spend reviewing.

I have some down time right now and plan on learning a few more items on my back log. Stephen Grider has a nice library of courses and several of them cover topics I'm interested in learning about. If they are set up the same way as this course, I think I'll get a lot out of each of those.

This course was a perfect introduction to Go. It covered the basics, assumed that students have some programming knowledge and related this "new" language to others you've probably utilized. It doesn't dig into the CS101 concepts, other than to briefly mention how certain things are done (declare variable, function syntax, etc) and instead focuses on the aspects that make Go unique and useful as a language. 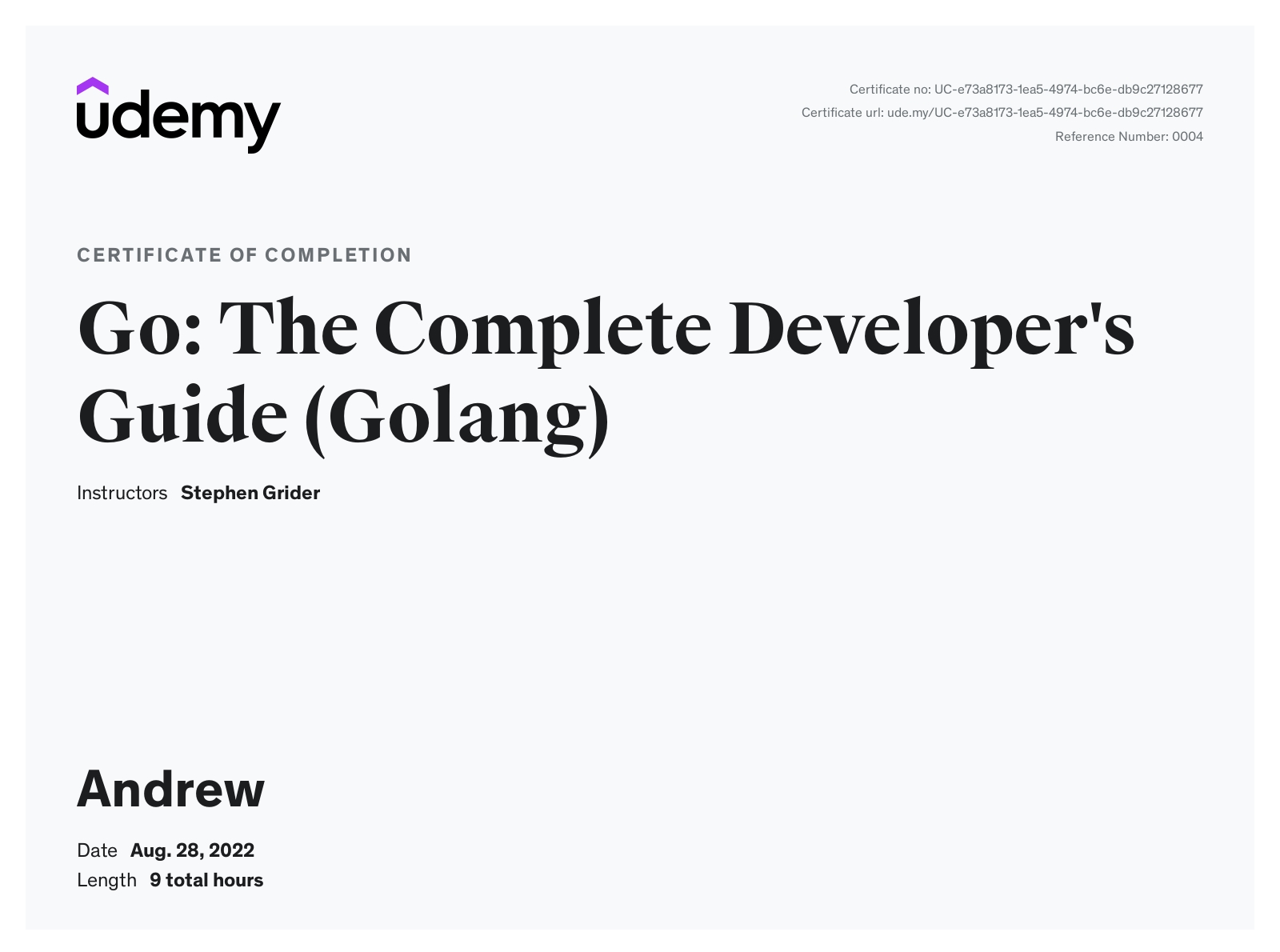 Part 18 of the Course Reviews series