Over the next several posts, I'm going to provide my review of the family's new indoor garden. At the point this article is being written, it's been unboxed, assembled and we've planted the first round of seeds. I anticipate by the time I'm done with this series, I'll have some plants migrated from the nursery to the garden itself. Once I reach the point of harvest, I'll provide a follow up.

With that, let's begin my review of the new Rise Gardens farm!

Update: For the final summary, please read my final review. I encourage you to read the whole series because I cover individual aspects of the product, but if you are just looking for the final review, you can jump right to that here.

For most of last year, I had my mind set that I wanted a small indoor garden. We used to have an outdoor garden, but it never really did that well. This was due to both the soil and the wildlife. Last summer and fall, I went and forth between building an internal garden and buying one and never really settled on one. During the winter, I found Rise Gardens.

This is a hydroponic garden, which is exactly what I wanted. I don't want soil everywhere and I'd prefer something self contained. Plus, I was secretly hoping the kids would find it exciting to watch vegetables grow and then harvest and eat them.

Shortly before the entire world shut down due to COVID-19, I ordered a garden. It was scheduled to ship in mid-February. Sadly, it did not. The shipping date arrived and an email notice was sent saying that shipping had been delayed approximately a month.

Mid-March showed up and again, no garden. This time, though, I was promised additional nurseries and some plant nutrients for waiting patiently. I had no major complaints and with the world slowly isolating itself, we were figuring out what was going on. The delay was not a problem.

Then came mid-April. Another email and another shipping delay. However, the nurseries, seeds and nutrients would ship on time with the garden being delayed a week. As the email said, the nurseries showed and a week later so did the garden.

The delays were unfortunate. But, I really have no major complaints. Rise Gardens was very communicative about the delays and the causes. A global pandemic will screw with your supply chain and logistics capabilities. Plus, the nurseries were nice. I'll cover those in a later article.

I appreciate the level of communication that I've seen so far. I hope that continues.

We ordered the triple level garden. According to the specifications, that means it's 66 inches tall and weights 106 pounds. It showed up in three boxes. 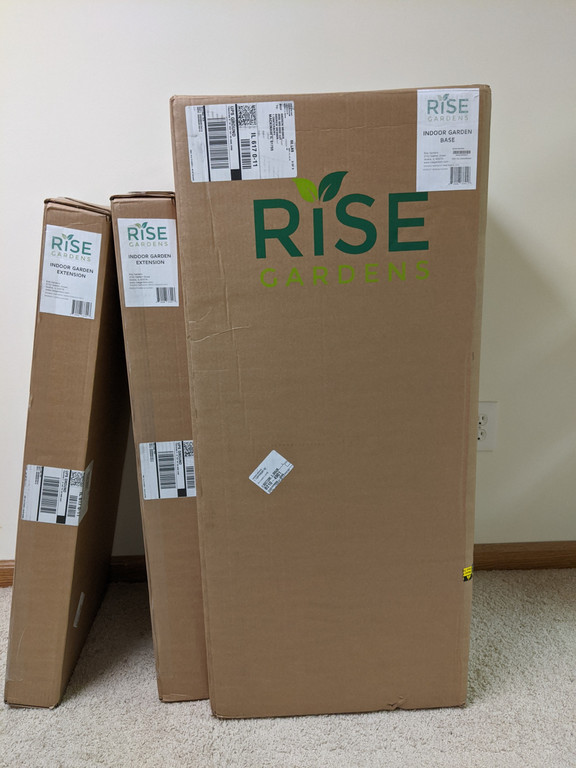 The two boxes on the left are the second and third levels of the garden. The big box is the main garden, the water basin, and the electronic brains of the system.

I started by opening the smaller boxes. Each extension comes with a planter tray, a grow light for the level below, some tray covers for the plants, wooden extensions to add to the main garden, and some assembly hardware (screws). 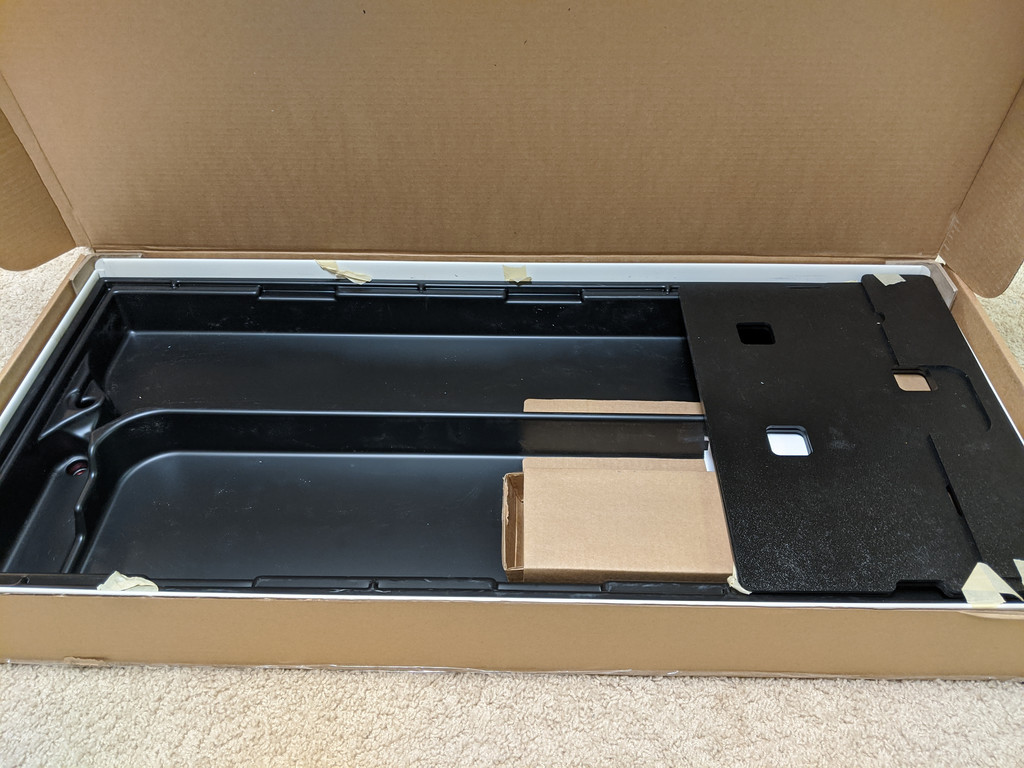 In this picture, the tray the water will sit in is the black tray. If you look closely, you see that it is in a white tray. This is the light cover for the lower level. 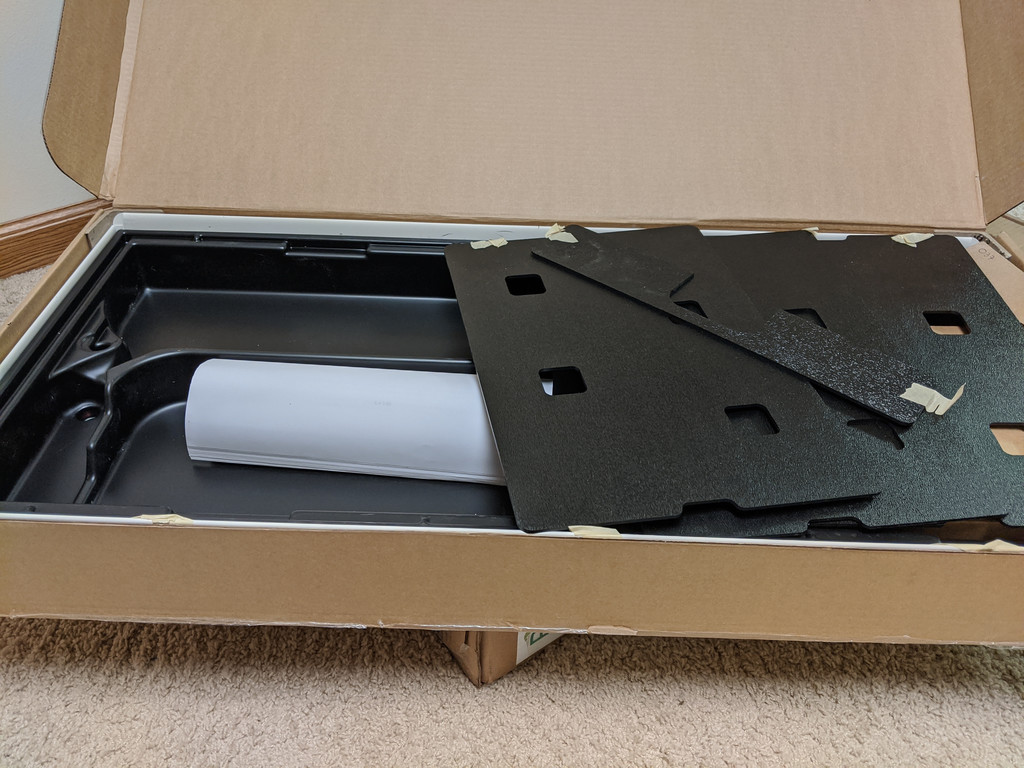 The second extension has the same hardware as the first. The difference is, this one didn't show up as nicely packaged. It looks like tape holdig the tray covers in place came loose in shipping and allowed everything to slide around. 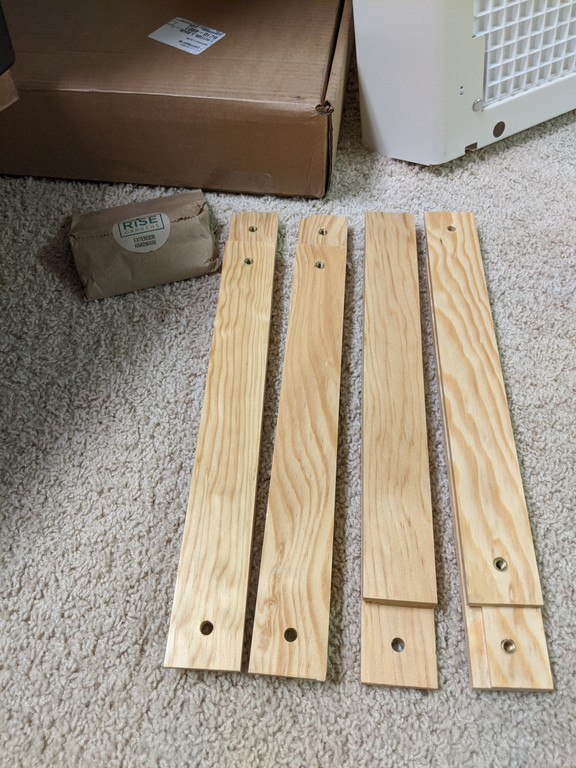 These brackets are nice. They have a spot to hide the wire used to plug in the lights, seem solidly made and (spoiler) fit together correctly when assembling the levels. 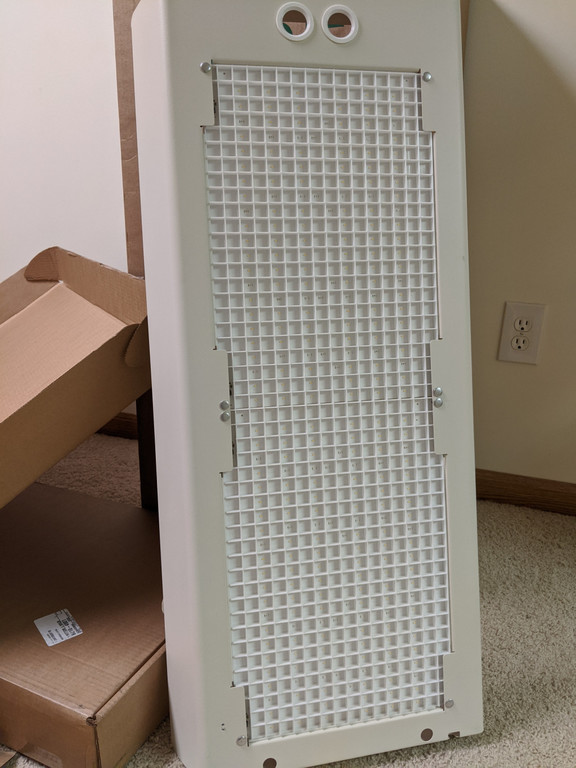 Each level of the garden has a set of grow lights. These are two LED panels. The light tray also holds the plastic water tray of the level above. The two holes you see at the top of this light panel are wher the plumbing passes through to the next level. 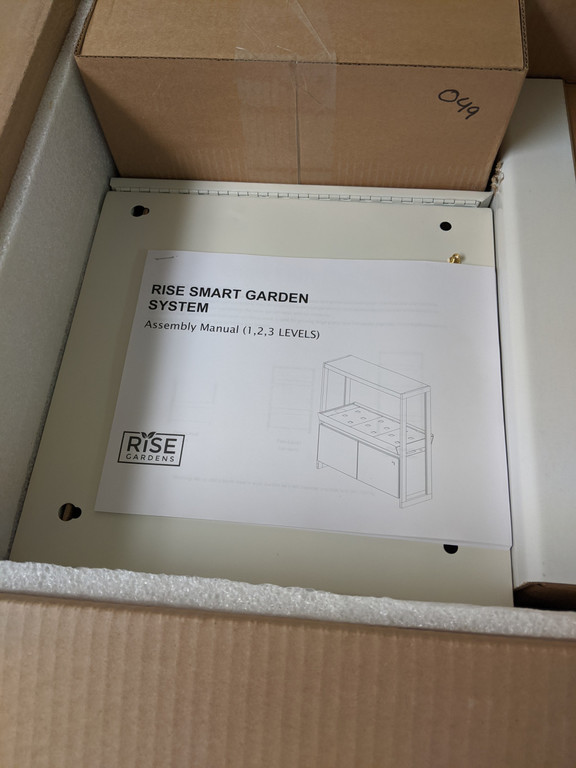 The first item is the metal shelving unit. When assembled, this shelf will hold the water basin inside. 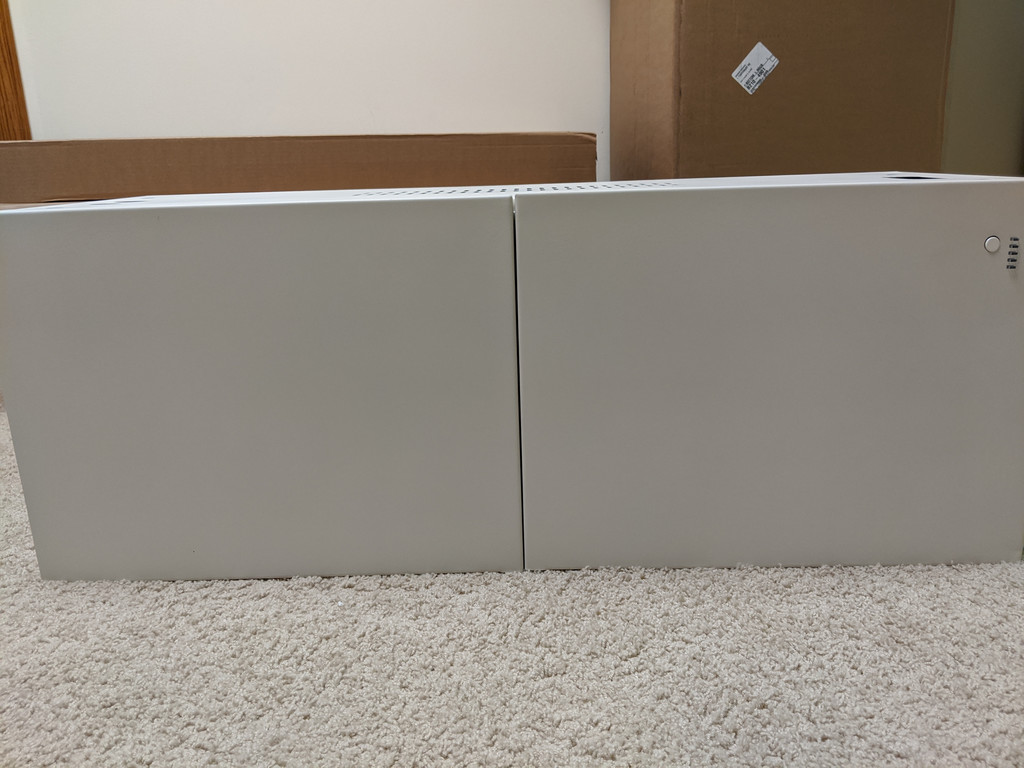 This shelf has two doors. On the outside are five LED lights which are used to indicate the water level of the basic. There is also a button that controls the LED lights. This button cycles through full intensity, half intensity and off. 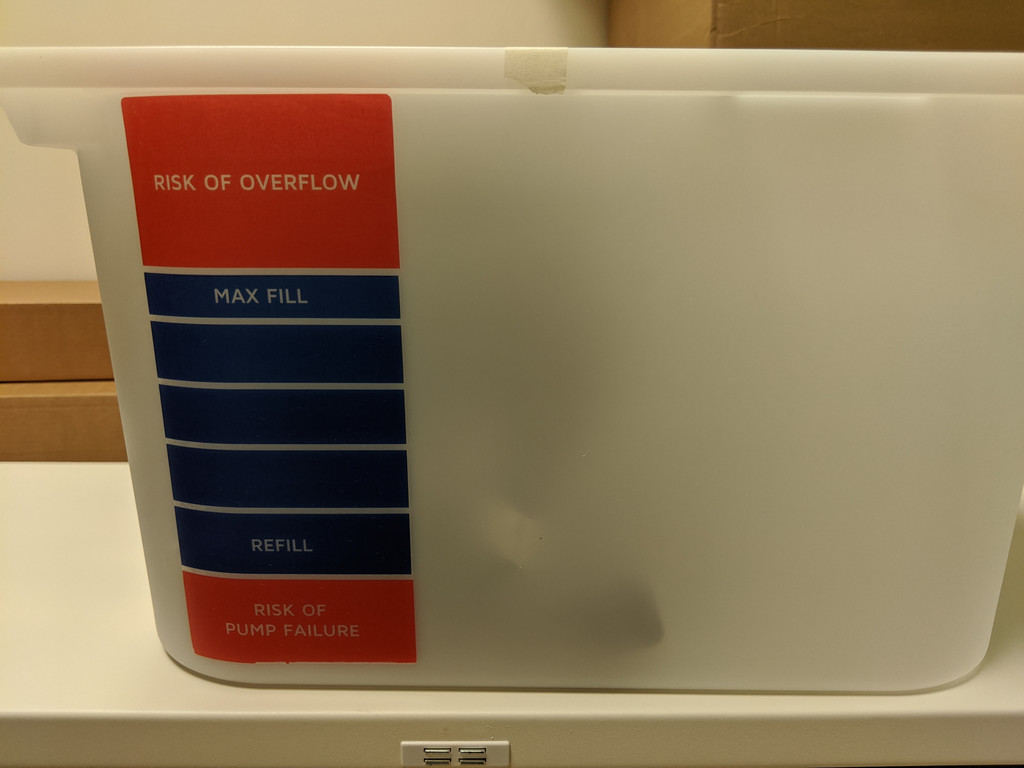 The marks on the water basic coorespond to the lights on the exterior of the shelving unit. There are five blue water level marks and five LEDs. 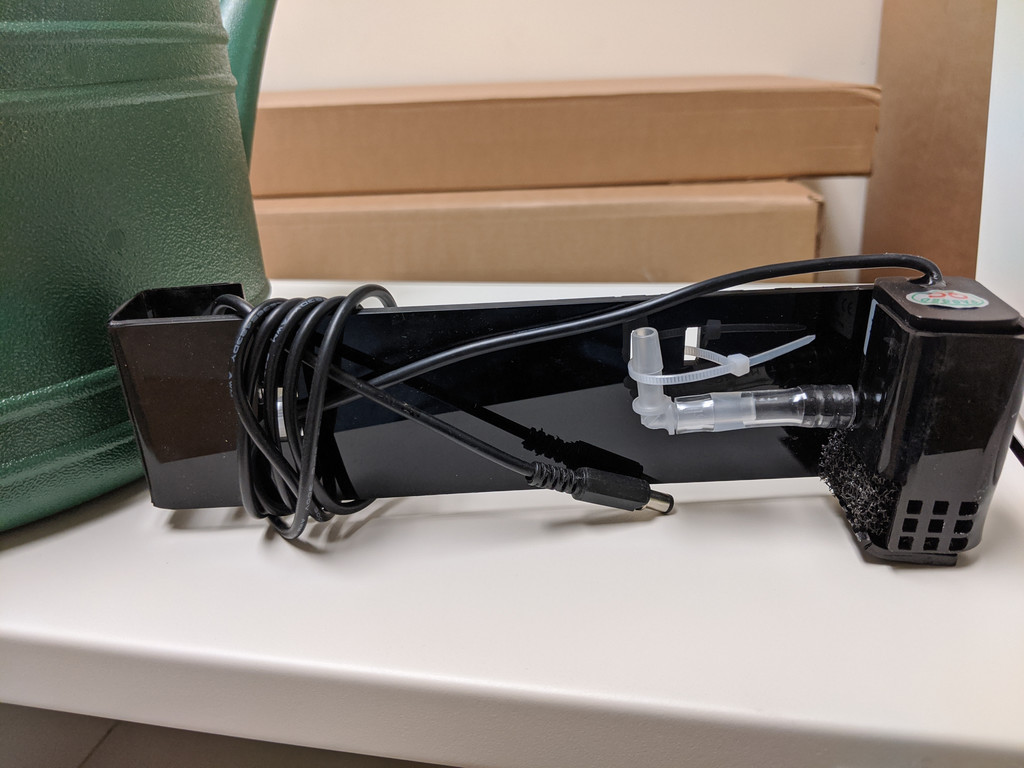 Tucked inside the water basin is the water pump. This hangs from the side of the basic and is submerged into the water. 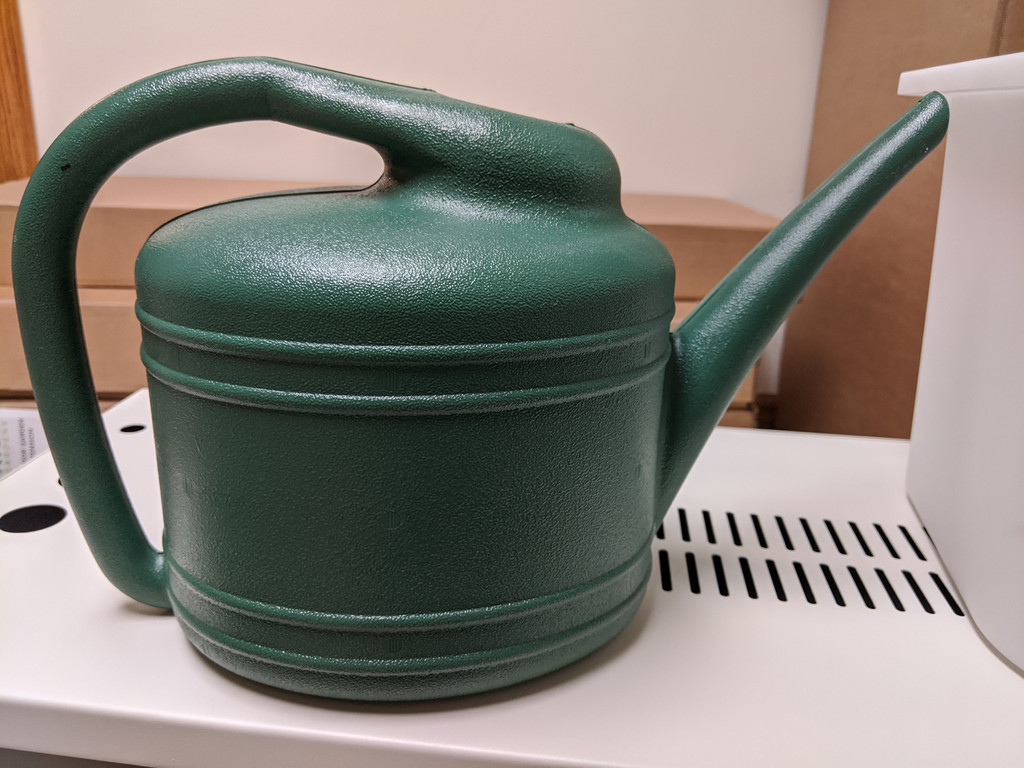 Rise Gardens provides a watering can. This is useful for filling the trays as well as the basin. 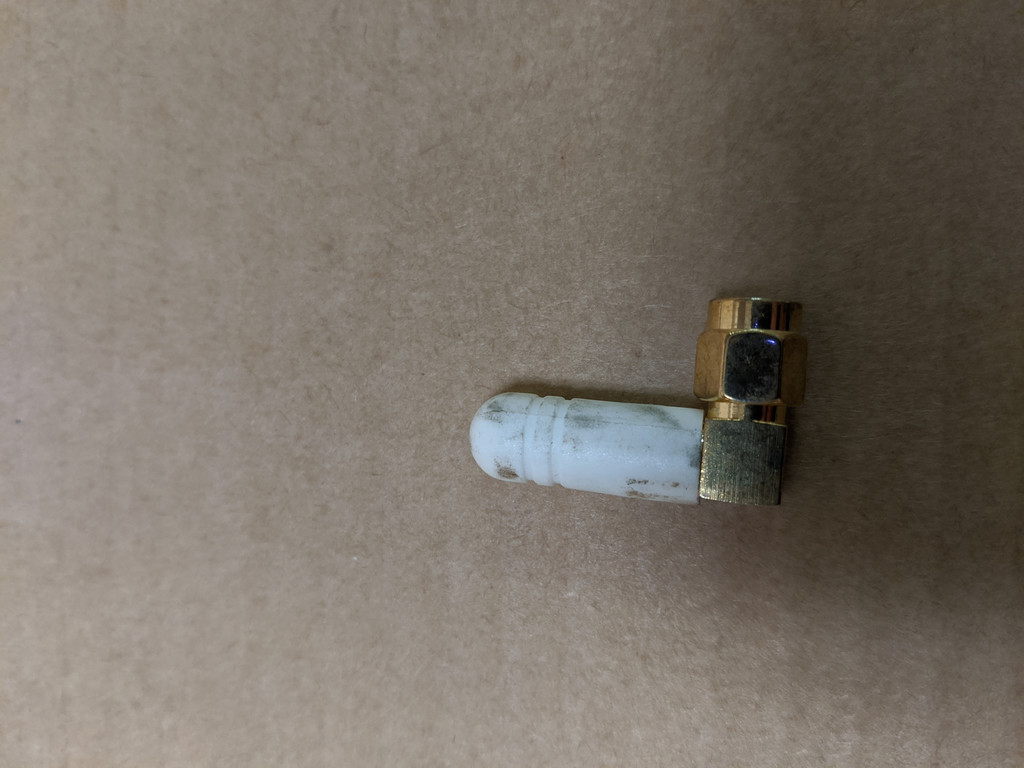 On the side of the shelf unit is a spot to screw in the little antenna. This allows the control board to connect to the local wireless network. In doing so, you can connect your phone to the garden and receive updates about water levels as well as help in planning out your garden and when nutrients should be added.

My antenna showed up looking rather smudged. 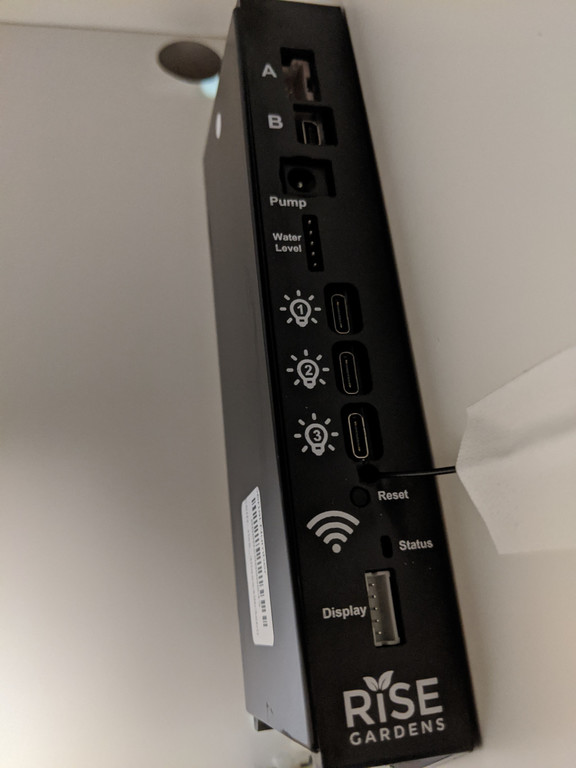 The control board is already set up and attached to the internal side of the shelf unit. I am not sure what the A and B ports are used for and don't recall reading about them in the manual, but the rest of the ports are pretty easy to figure out. 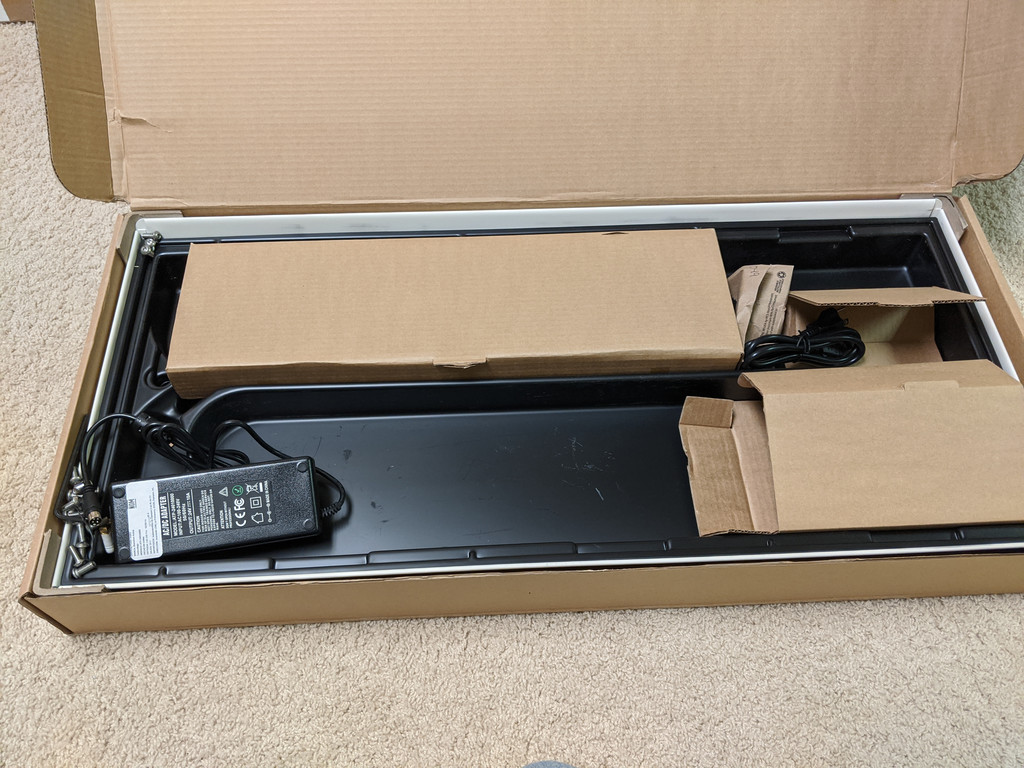 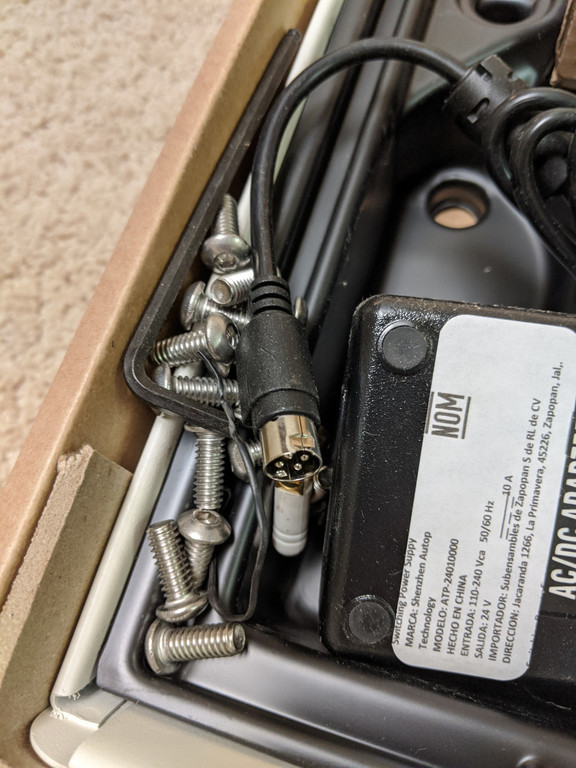 The assembly hardware and brick portion of the power supply slide all over. Some of the screws got wedged between the tray and the cardboard packaging.

Unfortunately, this also seems to have scratched the tray a bit. 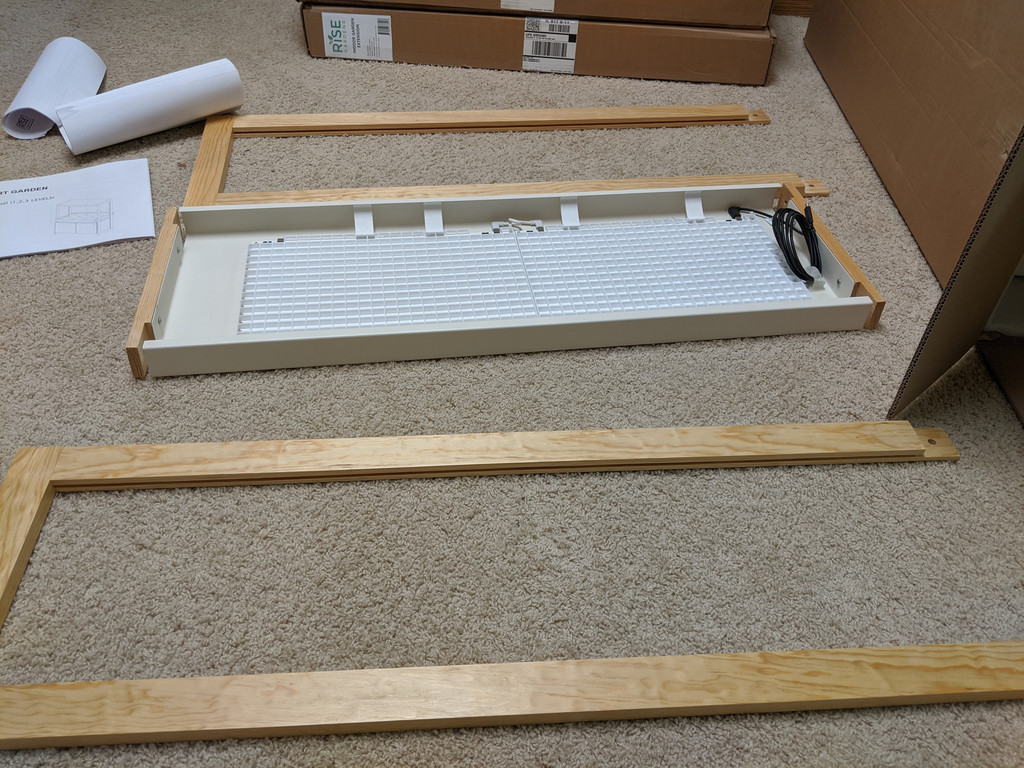 The last part of the packaging is the top light and brackets. The brackets here re the legs that attach to the shelf and hold it off the ground. The light will be installed above the top level of plants.

I'll provide a more concise break down of pros and cons in a later article, so that you don't need to read each individual one. For now though, let's talk about what I thought while unboxing everything.

The first thing I noticed was that Rise Gardens provides printed instructions. This is something I'd been worried about. I had found their assembly instructions on their web site and I was concerned that's what I've had to use to assemble the garden. The included instructors are the same as those on the website, but I like the tangible instructions to needing my phone near by during assembly.

The second thing I noticed, both during this unboxing and while unboxing the nurseries is that Rise Gardens loves their packaging tape. Box seams are fully covered. Tape is not something they are concerned about...

...on the outside boxes. Internally though, the lack of tape or using cheap masking tape, caused interal components to break free and slide all over.

The hardware feels very high quality. I don't feel like I'm going to snap these wooden legs or brackets when I put weight on them. The control board, and the electronics in general, appear very well assembled.

In short, despite some packaging annoyances, I'm looking forward to assembling this thing over the coming day. Next up, though, is unpacking my first round of seeds and the nurseries.

Next Post
Andy Wegner - is a father, an engineer and a computer scientist. He is interested in online community building, tinkering with new code and building new applications. He writes about his experiences with each of these.