Before I close out this series with a quick run down of everything, I want to congratulate Rise Gardens on closing a round of funding to the tune of $2.6M this week. Well done, Rise Gardens!

I started this series a little over a month ago to document my new Rise Gardens indoor garden. I've covered everything from the [initial opening of the garden][unboxgarden], garden assembly, to [planting the first plants][plants]. I've covered the hardware of the garden and the software and subscription service. During this time, I've watched my plants sprout, grow and been harvested (at least some).

A month isn't a lot of time for larger plants to grow. My tomatoes and peppers aren't even close to being ready, but several varieties of lettuce have been for a while. I've had the butter lettuce, romaine, and red oak already. My arugula is two days away from being ready, according to the app. I think it's more likely that it's about a week away.

Each variety has been good. I have favorites, based on tastes, but no complaints about the quality or taste of the lettuce. Surprisingly, the kids liked all of them too. 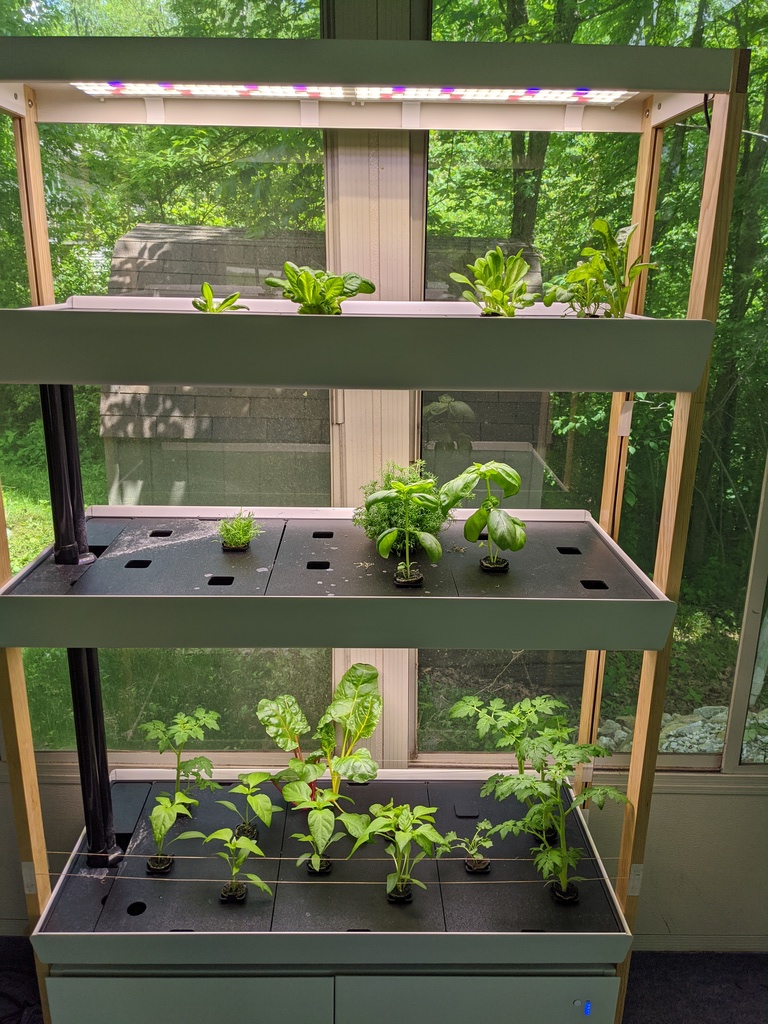 Five weeks into growing, and I have a decent crop growing. On the bottom, there is a couple tomato plants, some pepper plants, a swiss chard (almost to harvest too), and a tiny little kale plant. I finally got one of those to sprout. That was my last kale pod, so I'm happy at least one sprouted.

In the middle there are two basil plants and two chamomile plants. I've got a nursery started with some plants that will go in this area in about a week and a half. At the top is my lettuce. In this picture, I'd just removed two pods that had been completely harvested so it is a bit emptier than it had been.

On the bottom, you can see that I ran some twine to help hold up the plants. This was put in place to help the tomatoes before their stalks thickened. They had been leaning. Now that they are tall and thick though, they aren't even touching that twine.

I don't remember mentioning this in previous posts, but Rise Gardens has good customer support. I've reached out to them a few times for various questions. Each time I get a response within a couple days and have had my questions answered. They are friendly and know what they are talking about. Keep doing this Rise Gardens! As you grow, keep that focus on the customer.

In my post about assembling the garden I mentioned that there is a gap that appears when you place the small tray covers in place. It turns out, I was putting those trays on backward. This was pointed out to be by another Rise Garden owner. Thank you for your help!

In the picture above, you can see I have those trays in place correctly now. You can also see a long white stain on the second level that is clearly coming from the exit pipe. This is due to the splashing the water was doing before I turned the covers around and the lime in my water. When I clean the garden, this will get cleaned off too.

Rise Gardens has built an amazing product. It's not going to replace your trips to the grocery store. One garden isn't going to feed your family. But, it will supplement it. It will provide you with some fresh vegetables and herbs. It will allow you to grow for more of the year (especially in colder climates).

It's also proved to be very interesting for the kids. They love checking the garden each morning to see how big plants have gotten or how "their" plant is doing. They help out when nutrients are put in and like refilling the water with me.

There are a few areas that can be improved though. I think the biggest improvement that could be made, physically, is adding leveling feet. If the next iteration has adjustable feet, that solves the largest problem I had during assembly: how do I make this thing level?

Other areas of improvement are related to the software and subscription service. I mentioned these in my post about the software. Personally, I think the suggested times are a bit aggressive for plant harvesting. I'm continuing to watch, but based on the lettuces that have been harvested so far, the software tells me they are ready much earlier than they are. The subscription service could use a few additional features - mainly the ability to schedule selections out a few months and the newest seeds. I still don't see those and I think I'm going to miss them for June, because my shipping day is soon. I'll try again for July.

Of the wishlist of items I have, I'm hoping the round of funding they received can be partially used to meet some of these. On the software side, I'd love an API to pull back previous readings. On the hardware side, a light sensor and more lighting options would be amazing. If I had to pick between the two, I'd pick that API though...I am a programmer, so take that opinion with that bias in mind.

Would I get it again?¶

I absolutely would get this again. This is a great in door garden. It grows way more than herbs. It's large enough to grow big plants. It's expandable to grow more plants. It's easy enough to not kill plants. With a few improvements, I'd have no complaints at all.