In my last post, I opened all of the boxes related to my new indoor, hydroponic garden from Rise Gardens. Today's post goes over the opening of the three nurseries I received. Let's continue my review of the new Rise Gardens farm!

I mentioned in my first post, that there were shipping delays with the garden. One of the things that Rise Gardens did to make up for this was ship additional nurseries, nutrients and seeds.

The nurseries showed up a week before the garden did. Had I been planning properly, I would have set them up at that time. That way when the garden arrived I'd be a week into waiting for my sprouts. Alas, I did not, so the garden was assembled the same day the nurseries were started.

Oh well. On to the unboxing! 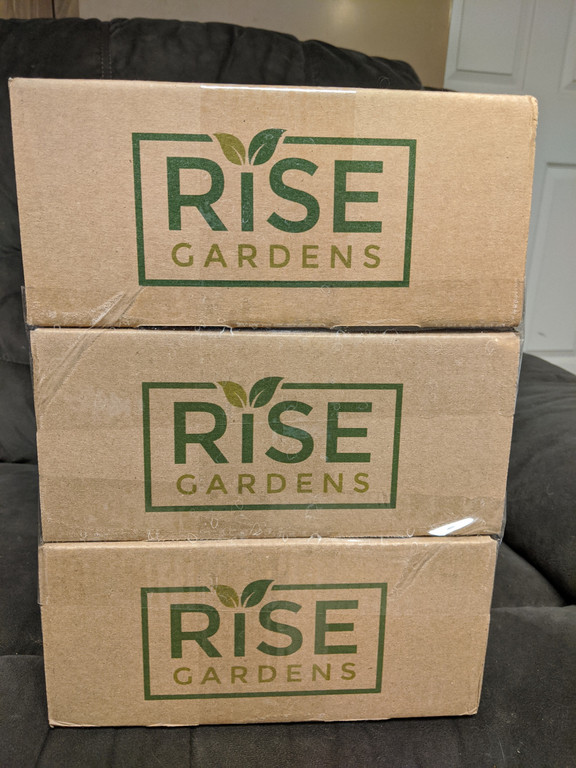 The nurseries showed up in three boxes, all taped together. This should have been my first indication that the company loves tape. 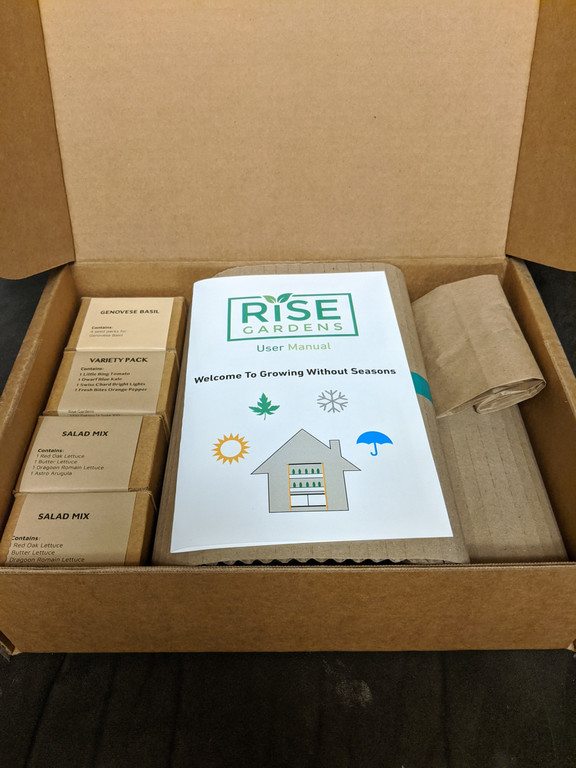 Boxes two and three had identical contents. Box one had a couple extras. The first extra was this nice quick start guide. 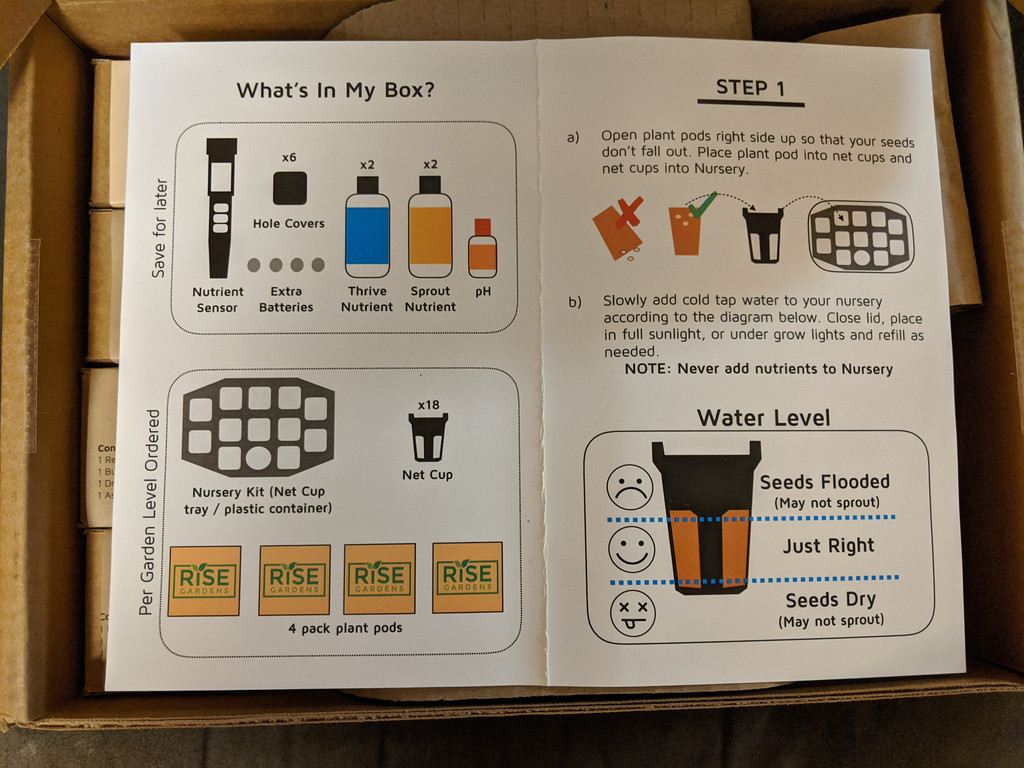 It very quickly covers what's in the three boxes:

It also gives you a quick overview of how to use the nursery. It's pretty simple: 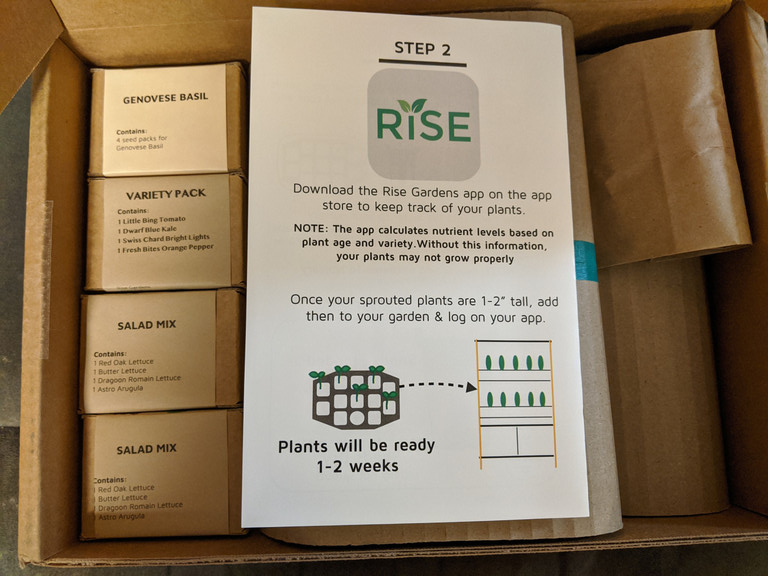 The last step in the quick start is a note on the application provide by Rise Gardens. I'm new at hydroponics, so I'm looking forward to using this for the first few growing cycles. I'm also hoping that I learn something about how much nutrient solution I should be adding, so that I don't need to be reliant on the app in the future. We'll see how that works out. Technology is nice. 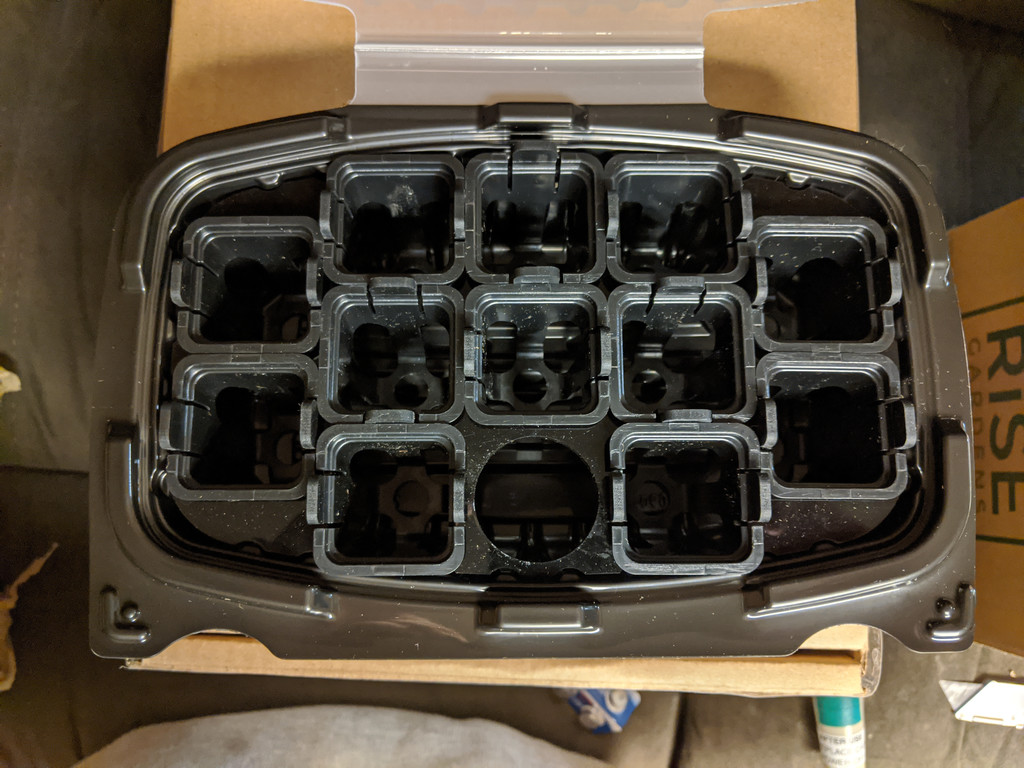 On to the nursery! I'm going to admit, I was surprised by how small this nursery is. I don't know what I was expecting, but it was larger. Now that I've thought about it for more than five seconds though, this is perfect. This is a nursery. It's designed to help the plants sprout, not grow. That's what the garden is for.

The nursery holds twelve plant pods and has a hole for adding water. If you look closely at the inside of the quick start guide, you'll see the nice bold warning: Never add nutrients to nursery. 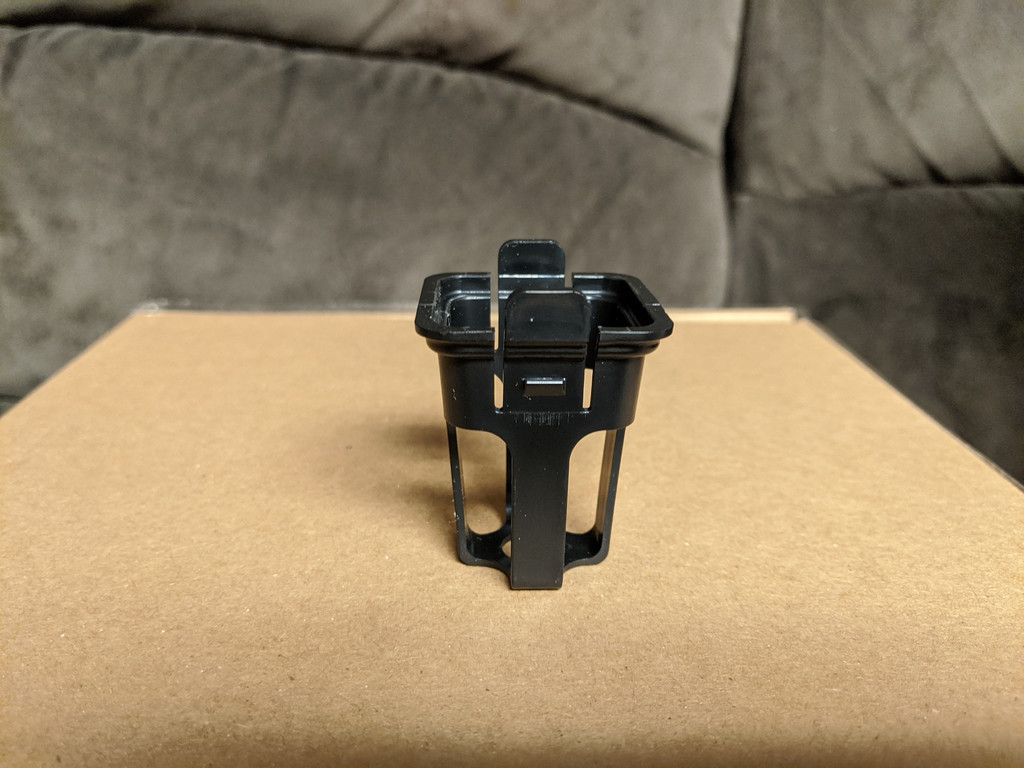 The plant pods, or net cups as the quick start calls them, clips into the nursery. They are easy to add and remove. They are also much more solidly built than the plastic of the nursery. I'm interested in seeing how the nursery holds up after a couple cycles of clipping/unclipping these pods. 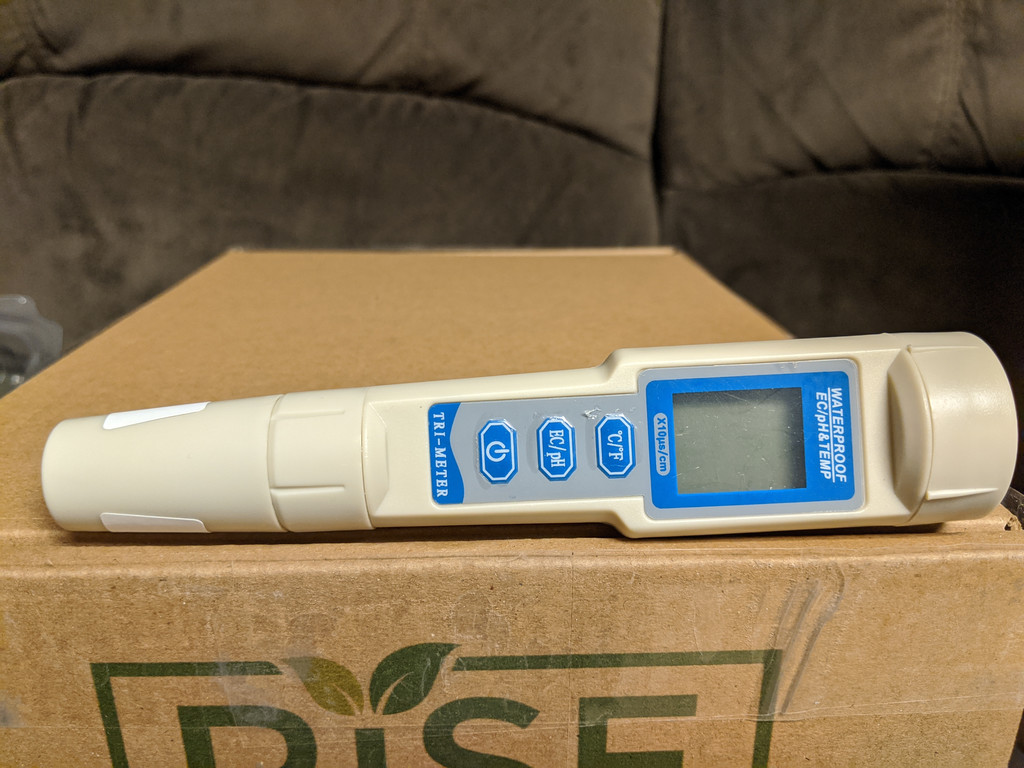 The last thing in the first box, apart from the seeds, is the nutrient sensor and extra batteries. Before I migrate plants from the nursery to the garden, I'll read up on how this works. In the mean time, quickly looking at it I see that it does pH readings and EC (electro-current) readings. As I go through a few cycles, and with the help of the app, I'll figure out what is the correct range of values for each of these. 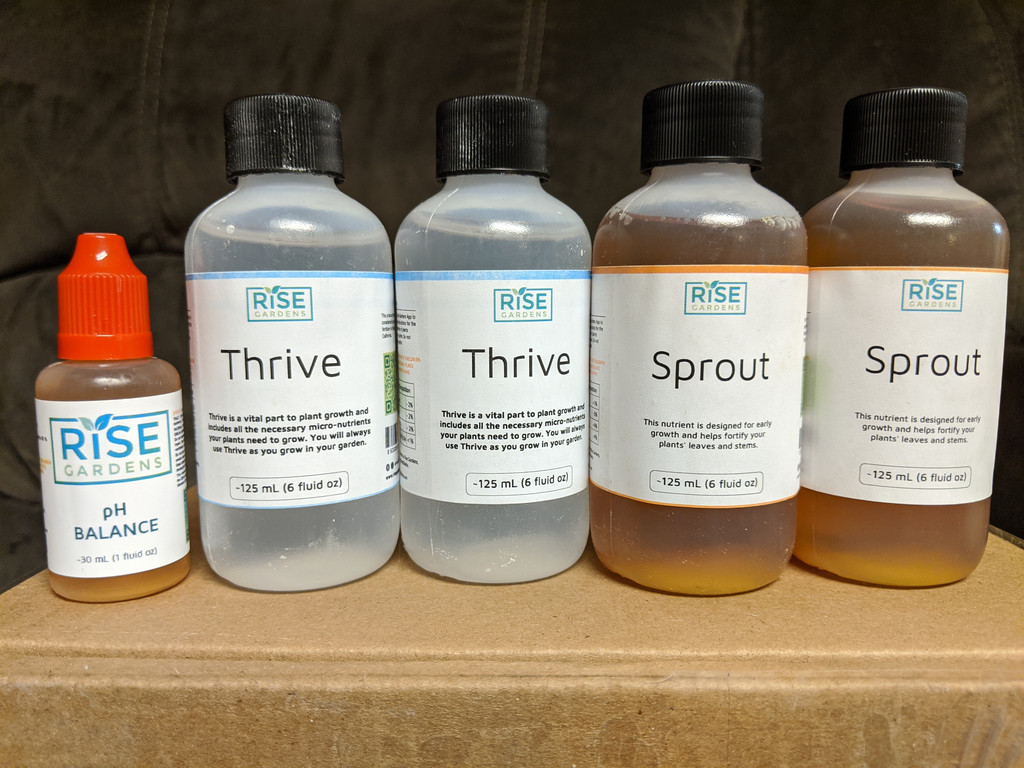 In boxes two and three, there were nutrients for the garden. It's not mentioned in the quick start, but in the large instruction manual provided with the garden itself, there are brief instructions on the difference between the two provided here. The general idea, though, is that it helps the plants grow and produce. Obviously.

Now we get to the seeds. What will I be growing on the first round of two of plants. With a three tier garden, and three nurseries, I have room for 36 individual. That's a lot of vegetables all at once. I'm planning on staggering these in 3-4 week batches. That what I don't get 40 tomatoes all at once.

In the boxes, I received the same plants for each, plus an extra box of chamomile in boxes two and three. That's eight pods. I'm not sure what I'm going to do with that much chamomile, but I'll figure it out. 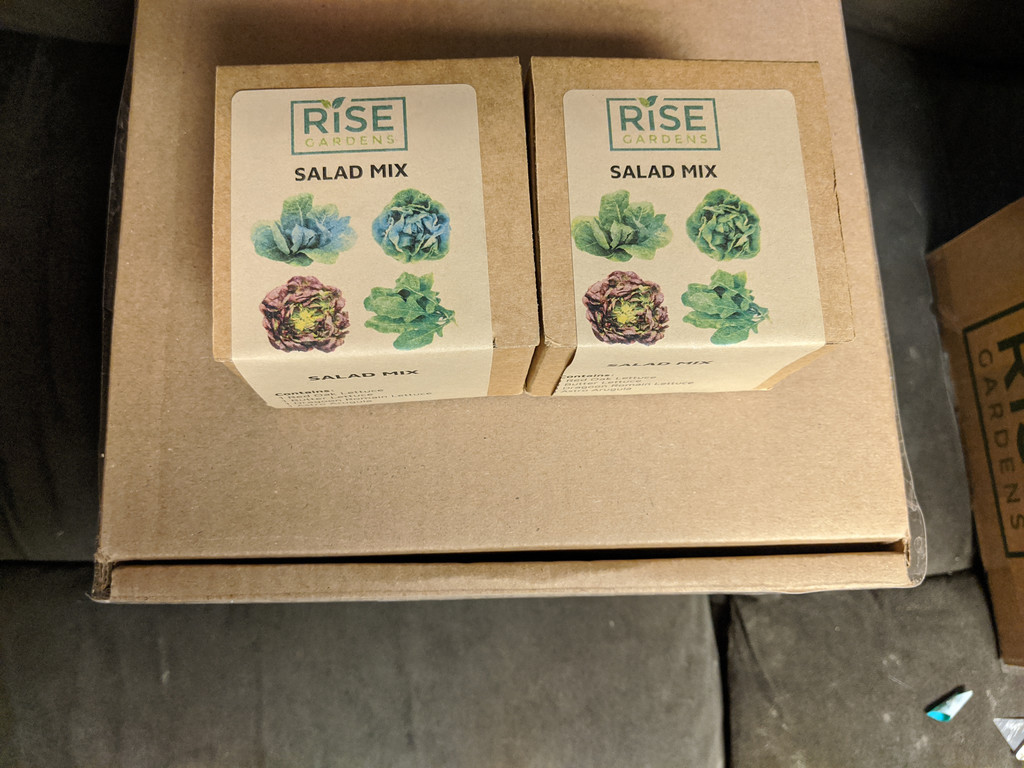 In each large box, I received two salad mix boxes. Each of these contains

I'll have lettuce forever. Excellent. These also grow relatively quickly, so I'll be able to cycle through these consistently. 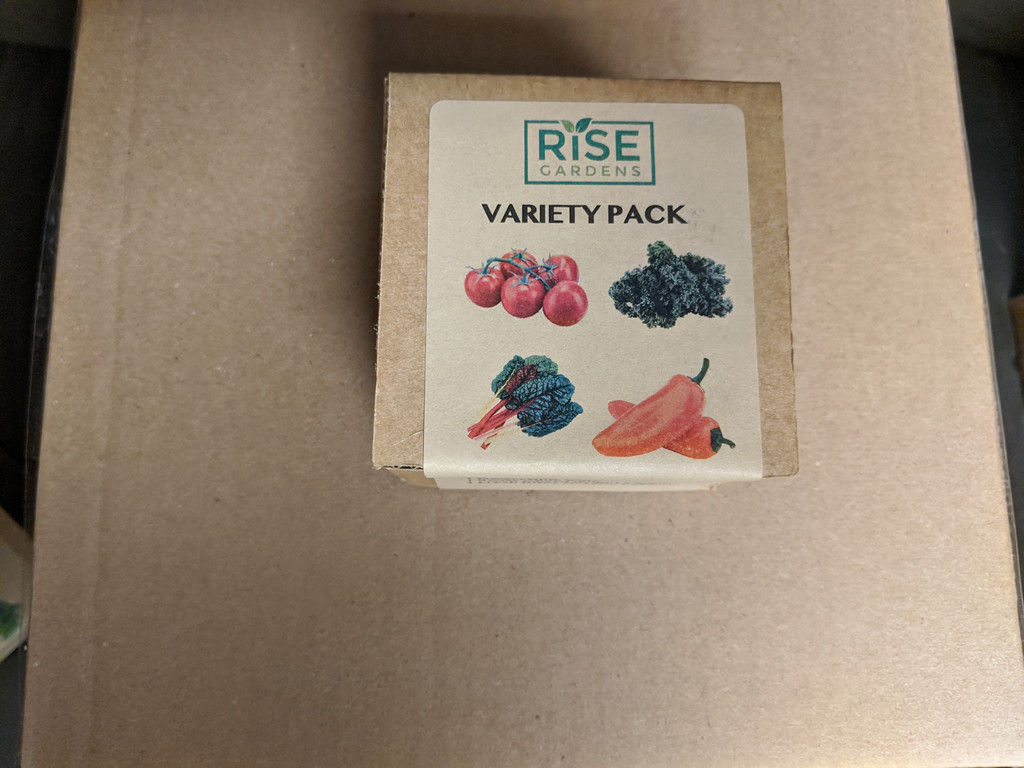 I received a variety pack in each large box. This pack contains 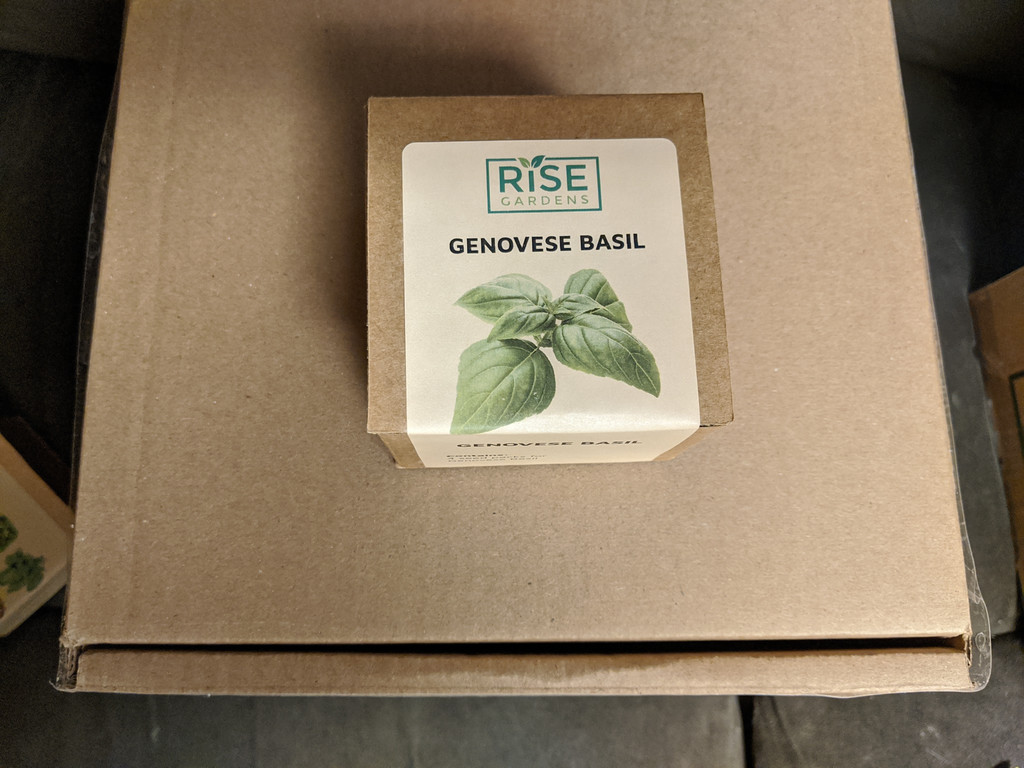 The last package of seeds was four pods of basil, in each large package. I'm not sure what I'm going to do with twelve basil pods, but again, I'll figure it out. 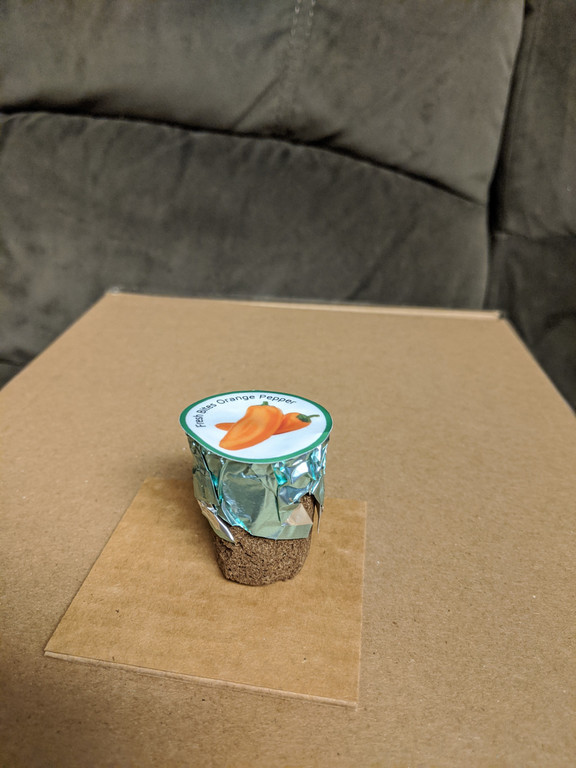 The plant seed pods fit nicely into the net cups. There are a couple seeds in each pod.

The nurseries look easy enough to use. Select the plants I want, stick the seed pods into a net cup and add water. Wait a week or two for sprouts and then transfer to the garden until harvest time.

My only complaint about this entire round of unboxing is rather minor. Honestly, it wouldn't even be a complaint, if I hadn't received the variety packs of seeds. If, instead I'd gotten just single pods of lettuce or tomato or peppers, I wouldn't have thought of it.

My complaint is that I have twelve pods of basil. I don't use that much basil. A variety pack of herbs would have been awesome.

But, as I said, very minor complaint. I will figure out what to do with some fresh basil. I have family members that will probably be happy to get some.

With another unboxing complete, I am ready to start assembling the garden. My next post will cover assembly of the garden.