Stack Exchange has over 130 sites in its network. Each of those sites has at least 3 moderators that are glorified janitors:

A lot of the moderation work is extremely mundane, almost janitorial. It’s deleting obvious spam, closing blatantly off-topic questions, and culling some of the worst rated posts in various dimensions.

The ideal moderator does as little as possible. But those little actions may be powerful and highly concentrated. Judiciously limiting your use of moderator powers to selectively prune and guide the community — now that’s the true art of moderation.

This works so well in the Stack Exchange network because the users are able to handle most moderation tasks. As users gain reputation, they gain privileges. With these privileges, they are better able to maintain and cultivate the content on the site.

Not all activity can be performed by users though. This is where moderators come in.

I already have a diamond (♦) on the Community Building site. I was appointed one of the Pro Tempore moderators during the beta phase of the site. This is my first experience moderating on Stack Exchange, beyond what my reputation on Stack Overflow gets me. It is not, however, my first time moderating. Community Building is focused on various aspects of building communities - both online and off. It caters to users from all aspects of a site (owners, moderators, users, advertisers and any thing else). My experience here led me to pursuing a moderator position on Stack Overflow. This site is orders of magnitude larger than Community Building. It has millions of users and millions of questions. With all this traffic, there are still only 18 diamond moderators. The idea of community moderation shows that it scales well.

The election cycle begins with the nomination phase. Users nominate themselves for the position. In 1200 characters or less, you lay out your platform. In this phase, nearly anyone can nominate themselves. However, there are only 30 positions available. If more than 30 people nominate themselves, then the users with the lowest reputation get bumped. With only 11K reputation, I am at the lower end of the spectrum of other nominees, but I am well above the lowest. I have the 8th lowest reputation. I've looked at previous election cycles. It seems unlikely that there will be 30 or more nominees. I think that I am safe.

I posted my platform shortly after the nomination phase opened. I stressed the work that I've already done on Stack Overflow and previous moderation experience on another Stack Exchange site (Community Building).

I'm Andy and I want to be one of your moderators.

Why vote for me?

I have the flagging history and experience to make the appropriate judgment calls. I feel that is a positive attribute that will help me in helping you to have the best experience you can on Stack Overflow.

I'll continue to help improve the site regardless of whether I am elected or not. I will be able to do a much better job at that, though, as one of your moderators.

With this, I received my "candidate score". It was 29/40. Not the highest, but not the lowest either. I expect, if any one is concerned about this score, it will be mentioned it in the comments.

The comments on my nomination post have focused mostly on the pros and cons of the automated script I built to flag comments. I was expecting this discussion. I'd classify most of the comments about the script as "cautious". Users seem concerned about something completely automated used to moderate or that I focus on low priority content. My response to this concern was:

[...] by automating the removal of this lower priority content it is easier to focus on the actively harmful stuff.

I'd like to point out that I have done more than "build a script". I've actively participated in review queues on Stack Overflow for years. I've flagged appropriate content (with a high percentage marked as accepted). I have also been moderator on Community Building. All of this, in combination with the automation, makes up my "platform". I have the experience of moderation, the knowledge of how the system works and the drive to improve the community.

It was also mentioned a few times that I'd be unlikely to utilize such an automated tool as a moderator. I promised to bring this concern up when I moved further into the election process.

Finally, I received a few comments supporting either me or the work that I've done.

The automation is very impressive - thanks for that, it's a real contribution to the quality of the site. That said - as a privileged user I suspect you won't be able to run these sort of scripts on your account for obvious reasons. – Benjamin Gruenbaum Apr 6 at 21:34

I can vouch for Andy's track record as a pro tem mod on Community Building. I want to note as well for the record that many of the main site questions and answers on Community Building are explicitly about moderation, and his contributions there also provide insight into his approach to the job. – Air Apr 7 at 16:54

I'd just like to point out that your response to my concerns is fair and reasonable, as well as polite, even if it isn't quite exactly how I see things. It certainly alleviates my concerns of misusing moderator power. I will be seriously considering voting for you. – jpmc26 Apr 8 at 6:41

Overall, I'm pleased with how the discussion has gone. It has been a few days since there were comments left though. Hopefully a little interest picks up during the primary phase.

I am also very impressed by the other candidates. There are many very good candidates that I'd be happy to work with (or be unashamed to lose to).

The nomination phases has ended. I have advanced to the primary phase. The purpose of this phase is to narrow the list of 30 candidates to 10. Those 10 will be the ones that can be voted on to be the next moderators. In the primary phase, users can vote nominees up or down.

As part of the election process, one of the other candidates created several tools to help users see nominee activity. He also created a live vote monitor. It was exciting to hang out in the Election Chat room and watch votes roll in. The position of 10th was highly contested toward the end of the primary. I was very pleased to see that everyone remained civil in the chat room too.

I ended this phase with 1492 positive votes. This put me in 15th. Sadly, not enough to advance to the election phase. However, there are several excellent candidates that did advance. Good luck to them. 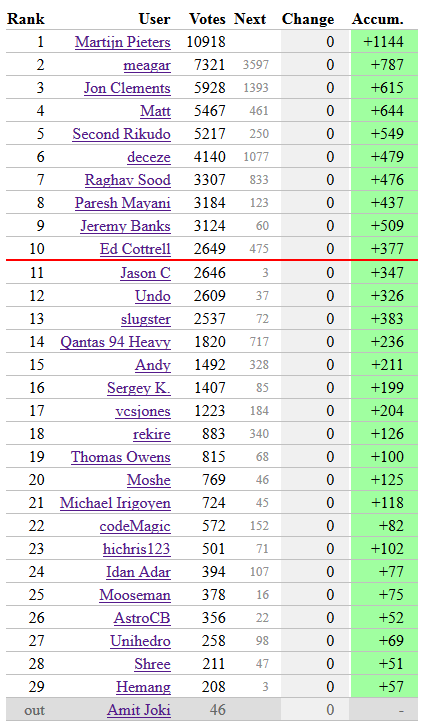 Part of the primary phase involves answering questions that users have posed during the nomination phase. These questions were voted upon and the highest were included in the questionnaire. My response was removed at the end of this phase because I did not advance. I was prepared with answers about my moderation style and my expectations for the position.

One of the other tools that was created during this cycle showed nominee activity on the site over time. This was a quick way to compare nominees based on the number of activities they have performed on undeleted posts (because data related to deleted posts is removed from public view). It provided, at a glance, a way to see who is and is not active.

Below are the charts of my activity that the tool created. The green vertical bar is account creation date. The orange/brown vertical bars are previous election windows.

My Meta Stack Overflow and Meta Stack Exchange charts show a fairly low activity level. Unfortunately, I think this is obscuring the posts that I do make simply because of the large scale on the y-axis.

Finally, the last chart shows the combined activity across all three areas (SO, MSO, and MSE). It looks very similar to the Stack Overflow one because of the lower activity levels on the two Meta sites.

The election is over. Three great candidates were elected. One thing I am like about Stack Exchange's elections is their usage of OpenSTV and the Meek STV method. The results of each round of the election cycle are available at opavote.org.

Like most elections, there are known and unknown winners before the election even begins. The response that Martijn Pieters received from the time he nominated through the final moments of the election all but guarenteed a victory for him. It is a well deserved victory. I hope that he is able to keep up his frequent, high quality, answers in the python tag. If not, his drop in activity will be felt. The surprise, to me, was Jeremy Banks. He ended in 9th place in the primaries. That doesn't mean he can't do the job.

I've interacted with all three moderators on site and in chat prior to their victory. I've been very happy with those interactions. With their promotion, I look forward to working with them as a moderator on the Stack Exchange network in the future.

Congratulations to the winners!