In April, I ran for moderator on Stack Overflow and didn't make it through the primaries. That's ok though, there were several very good users that did get elected. In a surprise announcement, though, Stack Overflow is running a second election this year. This is the first time this has happened since 2011. I'm still interested in a position and I'm still active in the community, so I'm going to run again. This post will follow the process.

Like last time, the nomination phase began with users throwing their hat into the ring. Nominations were slower and fewer this time. Only 19 nominees, so no one was eliminated due to low reputation. Several users from the last election are rerunning too.

My platform hasn't changed much since the previous run. Below is my nomination post. This time, I tried to pull emphasis off the automated script by putting it lower on the list of things I've done and instead focused on the moderation tasks I do on Stack Overflow and the work I've done on Community Building. We'll see if it works.

Hi Everyone, I'm Andy and I'd make a great moderator for Stack Overflow.

I have a history of good community moderation already. I enjoy the moderation aspect on Stack Overflow (and Stack Exchange in general). I deal with users with respect, even if our opinions on an issue differ.

With this, I received my "candidate score". It was 33/40. Not the highest, but better than last time. The score wasn't mentioned in April. I am not expecting it to be an issue this time either.

The primary phase is in the third day. In day 1, I was hovering around 9th/10th place. Overnight, between days 1 and 2 though, I dropped down to 11th. I've been sitting here consistantly for a full day now and, while still gaining votes, I'm not gaining as fast as 10th position. It appears I may not make the cutoff by Friday's deadline. While disappointing, there are a few things that I came away with that I'm very happy about.

In the last primary, I revieved 1,492 positive votes. I've surpassed that already. I've over 2,100 currently. I'm pleased with that upswing. I was also more prepared for the questionnaire portion of the primaries this time. I've gotten the second highest number of upvotes on my responses. Several of the questions were similar to last time, but there are a few that I think should be included in the future elections.

This first question is a great post for candidates. It allows them to show off their involvement in Meta and show their best work. For users, it gives them a sense of how a candidate interacts with the community. I am very surprised that several candidates list only one or two posts. This seems to be doing a disservice to themselves.

Do you have any Meta posts that you're particularly proud of, or that you feel best demonstrate your moderation style?

My response to this question:

I'm proud of several of my posts both here on Meta.SO and on other network sites I participate in. Here on MSO, I have two questions that I am proud of:

In both of these, you can see that I care about quality on Stack Overflow. I've spent time analyzing the problem, as I see it, and present my findings to the community. I participated in the discussions that both posts generated and continue to run the bot to this day.

Elsewhere on the network, my participation in meta has helped to shape communities. For example, on Hardware Recommendations, my meta post about "What type of hardware is allowed" helped to set the scope of what the community accepts as on topic hardware. I've also helped to set up the high quality guidelines for questions and argued against certain types of tags and hardware.

With all of these, I've presented my arguments and logic and strived to remain professional. I believe the community on HardwareRecs has seen that as well.

Finally, on OpenSource, I made a post about how moderators had implemented a policy to watch the reviewers. It was similar to the long removed "flag weight" option that used to exist. I believe the post was presented in a way that questioned the decisions of the moderators, yet remained professional.

With all of these meta posts, across the network, I think you can pick up on my moderation style and personality. I like data and I try to present my thoughts in a way that is understandable to all. I'm also willing to speak my mind.

This second question I struggled with for a bit. I've had ideas on how Stack Overflow/Stack Exchange could improve, but what did I want to present in this response.

My response to this question:

At the risk of talking myself out of a position, I think more community moderation would help the problem that Stack Overflow has with scaling moderators. There are a couple areas that I think would work well in opening this to the higher reputation users

These changes, and other areas where the community could be leveraged for moderation tasks, helps to remove the burden on moderators. Handling 2,000 (and growing) flags a day means that something needs to change. Moderators are exception handlers. They should be handling the cases that are exceptional - not comments that are no longer relevant.

For the community, this would be more involvement with the moderation aspect. Users would be able to more quickly clean up a comment thread. Flag it and it appears in the review queue. From here, the moderators don't need to be involved. The downside of this is that it adds another queue for users to be involved with.

With the primaries over, I ended with 2483 positive votes. This put me in 11th place. Sadly, this was not enough to get into the election. I was 185 votes shy of over taking 10th. Good luck to the candidates that made it. 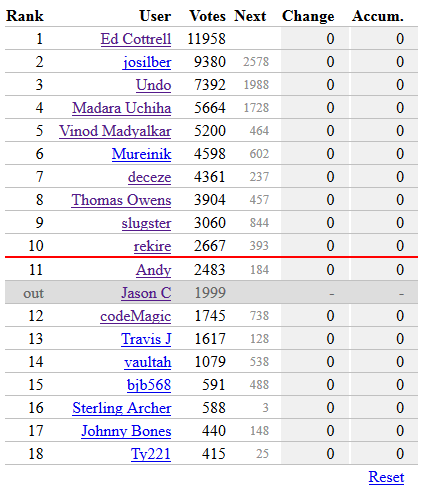 One of the tools that came out of this election was a way to visualize various data points to compare candidates. I provided a couple notes about outliers various candidates show regarding aspects on the site. I found it interesting to see what each user had "specialized" in.

The election is over and the new moderators have settled in. We've had our first bout of public drama over one of these moderators actually moderating a chat room too. gasp

I was closer to the top 10 this time, but still missed it. Even more surprising was that the user that ended up in 3rd in the primaries didn't even come close to getting elected. He was eliminated in the 5th round of final STV votes. I still think I'd make a great moderator for Stack Overflow, but I need to figure out the best way to promote myself in the next election.